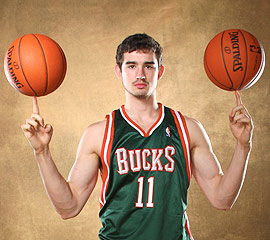 At 22, Joe Alexander is likely the first Taiwanese-born Third Culture Kid to play for the NBA. Born in Kaohsiung, Alexander plays for the Milwaukee Bucks and was the no. 8 overall pick during the 2008 draft. Like many TCKs, his background is as complicated as some of the plays he runs in practice. Although he was born in Taiwan, Alexander moved to Maryland with his family in 1988. He returned to Asia in 1996 with his father, older brothers Jeremy and John, and his younger sister Michelle. Both brothers would grow up to play basketball for Washington College in Maryland.

Alexander attended the International School of Beijing from 5th to 10th grade, with a short stint at the Hong Kong International School. When he returned to Maryland following his sophomore year, he and his mother spent two years trying to boost his college basketball exposure at Linganore High School. Knowing he wasn’t good enough to get any bites from Division I schools, Alexander, at 6’6″ (1.98m) and 170 llbs. (77 kg), spent one more year at Hargrave Military Academy in Virginia honing his skills. Needless to say, Alexander grew up playing on the courts in Beijing. If not for all the beatings he endured at the hands of his brothers and their friends, his future would probably be different.

In 2005, Alexander enrolled at West Virginia University on an athletic scholarship, majoring in computer science. He grew as a player and by his sophomore year was chosen for the All-American First Team, along with a 2007 All-American Honorable Mention. Junior year, Alexander led the WVU Mountaineers past Duke in the second round of the NCAA tournament. He was considered one of the best players in the region by ESPN.

Dube: What do you say, when someone asks you “Where are you from?”
Alexander: I usually say I’m from Maryland. However, if I have enough time to give them the real story, I say China. But in the U.S., it doesn’t help to say I was born in Taiwan and lived in Beijing.

Dube: How did being a Third Culture Kid prepare you for your basketball career?
Alexander: It’s allowed me to be easily adaptable, which was really important when I went to prep school… which was a strange situation. We were in the middle of nowhere, we were in a military school with tough classes. I think I dealt with it a million times better than most kids because of my experience moving. Also, in the NBA, we travel constantly and some guys hate it. But I love it. It’s almost an art that I’ve mastered, especially after all the constant moving between the U.S. and China.

Dube: And how did being a TCK hurt your game?
Alexander: Not growing up with any programs or structure. It slowed my development slightly in some areas. … You don’t get the same type of coaching and you don’t develop certain skills by playing pickup games. So I spent a lot of time in China not developing those skills.

Dube: Is there an enormous difference between playing basketball in the China, and in the U.S.?
Alexander: Yeah, there are slight differences in the rules. But it’s a lot more chaotic there; a lot more physical, which kinda resembled soccer. … When I was in China, I didn’t have any formal coaching or normal teams. We didn’t have any constant plays, which my friends in the U.S. were already doing. So the transition [to the U.S. from China] was tough.

Dube: How long did it take you to get into your groove?
Alexander: About a year. As a junior I had a tough time because I was used to playing “renegade” ball instead of on a team. It took me a while to get used to playing with other guys.

Dube: What is your most memorable childhood memory from your TCK years?
Alexander: In 7th or 8th grade, going to the local Chinese villages on our bikes and buying firecrackers. We would go through hutongs and just find our way through random ghetto alleys with little shacks ready to fall down, stacked ceiling high with fireworks. That place was [awesome].

Dube: Do you have an international fan base?
Alexander. I do… especially in China. I’d like to set up a website where they can send me comments and questions. They don’t have a lot of access to players who they can talk to so I’d like to set up something so they can reach out to me and I can reach out to them. I get a lot of fan mail from people overseas. It’s so funny to get mail from overseas at the Bucks gym with international postage on it.

Dube: Do you feel different from other players in the NBA because of your international background?
Alexander: Yeah I do. I feel like the guys in the NBA all seem to know each other growing up… from camp, or all-star games. But I came from nowhere. I kinda feel like that new kid who transferred to high school his senior year and joined the team.

Dube: Making no. 8 all-around draft pick must have been nuts. How did that day feel?
Alexander: It was the best day of my life. It was a culmination of waiting and dreaming every day. When it finally happened, it was… I don’t know… amazing.

Dube: Now that your rookie season is done, what are your most memorable moments?
Alexander: That would have to be the first time I stepped onto the court in uniform for a real game.

Dube: Since we, as TCKs, all have that notorious addiction to travel, where do you see yourself going next?
Alexander: I’d go back to Thailand. My favorite place I’ve been to is Phuket… I love how it can rain real heavy for five minutes and then just stop. That’s awesome… plus, nice beaches.

Dube: And finally, what would you say to expats in high school or college that have hopes to follow in your footsteps?
Alexander: They should know the same principles of success apply to anything, regardless of the fact that you’re a TCK. If you work hard, good things will happen to you.