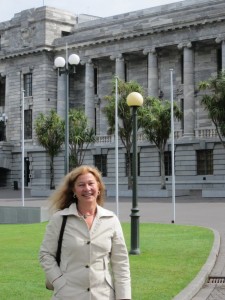 When she graduated with a masters degree in French and economics, Victoria Moore-Jones said she kept her career prospects open. After stints at the Asian Development Bank and the World Bank, Moore-Jones now works in the Office of the Clerk of the House of Representatives in Wellington, New Zealand.

1. Where did you grow up?
Although my family’s roots are strongly Kiwi, I was born in London and grew up in New York and Washington, D.C., as my dad was a New Zealand diplomat. I returned to New Zealand in 1972 at age 14, content in knowing I was “home”, but still feeling like an outsider with my embarrassingly noticeable American accent.

2. How did you get to where you are now?
After finishing school and university in Wellington, I ended up traveling again from 1984 to 2004, this time with my husband, a New Zealand diplomat, which truly wasn’t the nepotism it sounds like! I guess you could call it a coincidence of interests, with both of us looking to the wider world. We had several years each in the Philippines, the Cook Islands and back in Washington, D,C,, with stints in New Zealand in between, before I settled back in Wellington in 2004.

3. When did you decide that you wanted to work in Parliament?
For me it’s never been a case of “choosing a career path” — I think that’s a horribly daunting choice — but rather the simple approach of keeping all doors open, to see where life would lead. Keeping doors open, at a basic level, meant working on a good education, and trying to avoid the worst of the dumb choices that teenage years can lead you into.

For me, that led to a curious mixed degree in the Arts (a masters in French language and literature) and Economics, a combination that has proved useful and versatile in the moves that followed. I worked for several years as an analyst with the New Zealand Treasury (although always feeling slightly like an outsider without a post-grad economics degree), and then managed to find work in Manila with the Asian Development Bank, and in Washington, D.C. with the World Bank.

4. What’s your typical day like?
I am now an officer who writes policy reports in the Office of the Clerk of the New Zealand House of Representatives. I sit in on [the Commerce Committee’s] weekly meetings as they work through issues — it might be legislation to improve New Zealand’s finance sector after the global crisis, or to design better copyright laws in the age of digital downloading.

I then write up, as fairly and succinctly as I can, the committee’s views on the issues. Once the committee has looked over the report, I make any changes they want, proofread it and arrange for it to get presented to the whole of Parliament and posted on the public website.

I have written reports on policies reviewing the performance of state-owned energy companies, scrutinizing government plans for investing in nationwide broadband Internet, and examining New Zealand’s relations with its South Pacific neighbors.

5. How does being a TCK benefit your career?
I think living in other countries and cultures probably increased my tolerance and empathy, which are vital in a job that involves presenting various points of view impartially. Perhaps it’s also helpful to feel like a slight outsider when you need to present the big picture on issues without personal attachment.

6. Is there anything about being a TCK that held you back in your career?
It’s hard to think in terms of a “career”, when regular moves require you not just to change jobs, but to settle into life afresh every few years. But in my experience the opportunities that present themselves more than make up for the roads not taken.

7. What advice would you give to TCKs who want to pursue a career in your field?
Avoid being dogmatic in your own views. I think this comes more readily to people who have lived internationally and learned to appreciate diversity. It’s important to be unbiased, and able to analyze issues and then communicate them clearly and concisely. You need to focus on the big issues, but also care about detail and accuracy.

8. Who is the most interesting person you’ve come across through your work?
Too many to mention! It’s part of the wonderful variety of the work that you meet people from all fields who come in to present submissions to the committee. I really enjoyed last year’s Youth Parliament, when a group of very impressive senior secondary school students came in and held mock select committee meetings. Their approach was thoughtful and their views very valid.

9. What do you think are some of the biggest misconceptions that the public has about what your job entails?
There are many misconceptions about parliament’s work, generally along the lines of them being a bunch of over-fed, over-paid politicians who are out of touch with real people’s lives, engaged in tedious and unnecessary law-making that just makes people’s lives more complicated!

But in my experience select committees are rightly called the “work horses of parliament,” and I’ve been impressed by how in touch members are with real people in their electorates, and how much they care about trying to improve ordinary people’s lives. One example is their concern about elderly investors who lost their savings when finance companies collapsed in the crisis, and their hard work to try to ensure it never happens again.

10. Was there any other career path that you seriously considered other than the one you’re currently on?
Architecture and law both interested me, but seemed less readily transportable once I partnered with a diplomat and knew I would be moving to a different country every few years. Ending up as more of a generalist has served well in terms of keeping options open.

About Adele Barlow
Adele Barlow is a Denizen writer. She is a Malaysian-Kiwi who has lived in Hong Kong, Auckland, Wellington, Melbourne, and now London. Co-founder of yMedia, Adele now works as a digital media contractor in London. You can read more about it on her blog or follow her on Twitter @adelebarlow. We are a community effort and are rewarded when you 'like,' comment or share our essays. If you enjoyed this piece, please take a moment to 'like' or share.