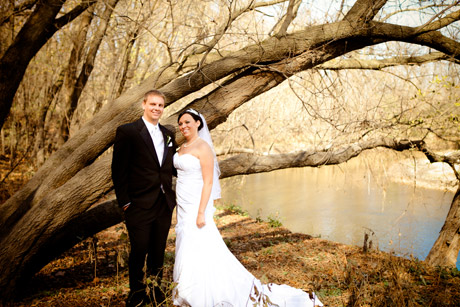 Chad Nelson, 26, was born in South Dakota and has lived in Iowa, Singapore and Minnesota. Marquita Nelson, 26. is from an Army family that moved around the United States frequently. She settled into Byron, Minn. after middle school.

Walking through the door to get home every day, Chad would wave to Marquita as she perched on her patio reading. Being next to the apartment entrance, Marquita’s patio was the perfect opportunity for Chad to spend a little more time each day getting to know her before heading into his bachelor’s pad where he and a couple of his friends lived. To Chad’s surprise, Marquita moved into his department at IBM and unexpectedly, the couple began spending large unplanned amounts of time together.

“We were forced to hang out for about a month,” Chad said, excitedly. They began dating shortly after.

Chad was a down-home Midwestern boy who had never seen the ocean until he was 15 when his family moved to Singapore for his father’s job. “I didn’t think it was a good idea at the time,” Chad described, recalling the drastic change in scenery from acres of farmland to swaths of concrete and designated park areas.

The new food and the increased demands of school work from the Singapore American School (SAS) were the two most challenging aspects of moving for him, he said. However, he quickly adjusted to the large variety of foods and the multitude of cultures in Singapore, and fell in love with the country.

Chad graduated from SAS and attended Iowa State, where he majored in Economics, and settled into a sales management job in Rochester, Minnesota.

Marquita was born in Byron, Minnesota. As a daughter of a Green Beret in the US Army, Marquita grew up moving around the country until middle school, when the family returned to Byron to settle down. Marquita attended St. Cloud State University in Minnesota and eventually began working for IBM, where the couple met and fell in love. Marquita invited Chad into her life knowing that he would not only be a wonderful husband but a loving father to Marquita’s four-year-old daughter, Kayla.

Chad knew it was time to make Marquita his life partner when he realized that there would be no better friend in his life than her. One night, Chad arrived home early and lit candles all over the living room floor. He put on a suit and waited on the top of the stairs with a bouquet of flowers for Marquita to return.

The ceremony was held at the United Methodist Church in Byron, Minn., where Marquita’s parents and grandparents had said their own vows. The beautiful ceremony was attended by not only family but many friends that travelled from far and wide to bear witness to the union. Chad never imagined that so many high school friends from Singapore would make the trip out to celebrate with the couple. In between the ceremony and reception, Chad received a call from an old SAS high school friend living in Japan. “I have no idea how he timed it so well,” Chad exclaimed with excitement, impressed with the impeccable understanding of timezones by his TCK friends.

For their honeymoon, Chad and Marquita spent time in Singapore and Thailand.

“I was so excited to show Marquita everything about my life in Singapore,” Chad said. “I have found someone who’s a great travel companion that wants to live it up and learn, just the way I did back in Singapore.”

Are you a recently married Third Culture Kid or Global Nomad? We would love to feature you in this column. Please email weddings editor Carol Lin at carol@denizenmag.com.

About Carol Lin
Dr. Carol Lin has lived in Taichung, Bangkok, Vancouver, Chicago, and San Francisco. Carol holds permanent residences in 3 countries but feels at home in Canada as well. She graduated from University of British Columbia and completed her Doctoral degree in Clinical Psychology at The Chicago School, currently doing her residency at Children's Hospital Oakland. When she's not holding therapy sessions with children, Carol is testing out water bottles for her site, mywaterbloggle.com, shooting weddings for her photography business, augustfour.com, or finding new eats around the Bay area. We are a community effort and are rewarded when you 'like,' comment or share our essays. If you enjoyed this piece, please take a moment to 'like' or share.