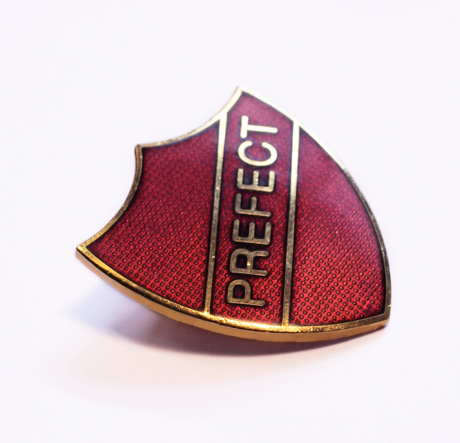 We moved to Belgium when I was 10 years old. I was a happy, friendly little tow-headed girl. My hair was so curly, my sisters called me “fizz-head,” but I didn’t care. My mother braided my hair every morning, and I had a complete wardrobe of ribbons for my hair that matched my clothes.  By the time I got home in the afternoon, little tendrils of curls would surround my head like spaghetti.  I never met a stranger; I made friends as easily as I breathed. In 5th and 6th grade I had my little coterie of best friends, each one just as “best”as the others.

I was an extrovert at school. In 6th grade I was selected to be a “prefect.” The school used a conglomeration of American and British traditions, and a prefect in British schools is a student who had good grades and showed leadership qualities. It was an honor to wear the little red pin that said “prefect”in gold letters. We were the safety patrol. We stood on the stair landings and told people not to skip stairs. We told them to to stay in line and be quiet. In the yearbook that year, a group picture of us prefects was on the inside front and back covers.

I never saw this picture until recently. I was sick on the last day of school and never got my yearbook. We moved back to the states soon afterwards. A couple of years ago, through the magic of Facebook, I reconnected with one of my girlfriends from those 6th grade days. She sent me a scan of the picture of the prefects. It was a shattering emotional experience for me to see it.

In the picture, the other kids were scattered on a jungle gym of sorts. Right in front, standing with feet apart and hands on hips, was me, posed like a little Mod Squad. I was the leader! Unafraid, unashamed and confident in every way. That was that “me”that I left behind when we left Brussels. Never again was I that self-assured or uninhibited.

Five months after we moved back to the states, my sister was killed in a car accident, and my family was never the same. If we had stayed in Belgium, would I have continued to be the same outgoing person? Maybe it was the accident and my sisters’ death that caused my personality shift, or the combination of the move, the accident and puberty. Who knows? At any rate, I was never the same.

I became the pitiful social outcast who hid in the bathroom stall during recess. While everyone else was chatting and visiting in the student lounge, I was sequestered in the safety of the girls’ room. I was the girl sitting alone at lunch while boys threw peas at me and taunted me for being “the new girl”. I hung out with the “wrong” crowd, learning how to “French inhale” a cigarette and dabbling in drugs. I became painfully shy, depressed and adrift. It was as if that prefect girl had died along with my sister.

After that, making friends was painful.  It was as if I wasn’t willing to take the risk of giving myself to anyone, because they would probably leave, or I would leave them.

As an adult I still find it hard to make friends, or to feel completely comfortable with anyone. I watch as groups of women drift towards each other and became fast friends. Perhaps I unconsciously put up a sign that says “stay away,”even though I want so desperately to have friends like that. On the other hand, I enjoy my solitude, a skill I’ve practiced after long lengths of time alone in hotels, on airplanes and new houses. Luckily, I have met people who decided they wanted to be friends with me, and I have welcomed and reciprocated their friendship.

I mourn for that girl in the yearbook picture. It angers me that she wasn’t allowed to continue to blossom. Everyone sometimes wishes their lives had followed a different track, and even though I do relish many of my experiences living overseas, I grieve for that version of myself that stopped existing in 1972.

About Elizabeth Branch
Elizabeth grew up in Japan, Belgium, the Philippines and Singapore before returning to the U.S. for college. She has a B.A. in International Studies from Trinity University in San Antonio, Texas, and recently completed her Master's in Library and Information Studies at the University of North Carolina, Greensboro. She previously worked as a paralegal and a librarian, but especially enjoys writing about the TCK experience. She has five children, three biological sons, and two daughters who were adopted from Kazakhstan. She has written pieces for Adoption Today magazine and her blog can be found at http://kazakhstanii.blogspot.com. We are a community effort and are rewarded when you 'like,' comment or share our essays. If you enjoyed this piece, please take a moment to 'like' or share.