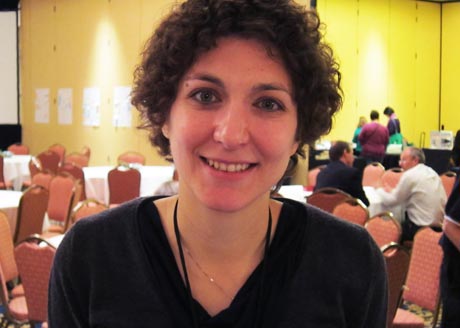 Deniz Gyger Gaspoz, 33, is a PhD researcher at the Institute of Psychology and Education at University of Neuchatel. She’s picked a pretty specific course of study: French-speaking, teen Third Culture Kids. During a brief chat at the Families in Global Transition (FIGT) conference, I picked her brain on what she had discovered so far. Deniz, a daughter of Swiss diplomats, speaks French fluently and has lived in Iran, France, Germany, Switzerland, Senegal and India.

What do you say when someone asks you, “Where are you from?”
If I’m here in Houston, I can say without a problem “Switzerland.” I’ve lived there for more than 8 years. But if Swiss people ask me where I am from, I will have difficulties to answer. I’ll say “Geneva” because I lived there and my family is there. Then sometimes I say Neuchatel [Switzerland] because I study in Neuchatel and I used to live there. And sometimes I say Biel [Switzerland] because I’m living there with my husband.

Why does your research focus on French-speaking teenagers?
I found that all the research that exists on Families in Global Transition are on English-speaking people, and I wondered if it made a difference if they are in a French speaking school or not.

My goal was to make the population of the Third Culture Kid known to French speaking people too.

What was the most surprising thing you found in your research?
How it was important for teenagers and for parents to speak about their experiences. I got a lot of thanks from teenagers for letting them share their experience [through interviews]. For a 14-year-old girl, moving was very difficult. She told me, “I am so happy to share this experience with you. Now I feel better.”

That for me, was the most surprising. That just to speak could help teenagers.

How has researching helped you understand your own experience?
When I began the research, I didn’t realize that I had unresolved grief. I am a researcher, and during interviews, I cannot be personally involved. But I realized that I sometimes was personally involved — when I  did interviews, I remembered some things that I had completely forgotten. I was stopped. I was unable to write anymore about my research because I realized that I was sad about some places that I had left, or some friends that I had lost, and I didn’t realize how lucky I was to have these experiences.

It was like psychotherapy for me to learn and understand.

About Steph Yiu
Steph Yiu is the founder of Denizen. She has lived in Hong Kong, Taipei, Singapore, Edinburgh, Portland, Chicago and Boston. Formerly the web editor for the Chicago Tribune’s RedEye, she is a journalism grad from Northwestern University and has interned at The Oregonian and The Boston Globe. She blogs regularly at stephyiu.com, and tweets sometimes from @crushgear. We are a community effort and are rewarded when you 'like,' comment or share our essays. If you enjoyed this piece, please take a moment to 'like' or share.