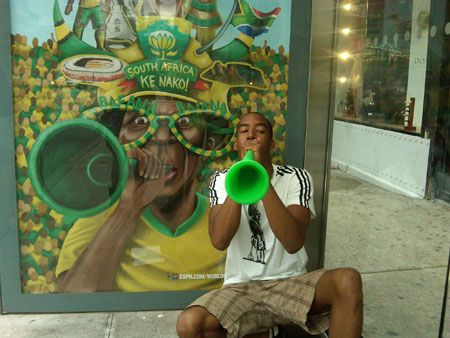 Well folks, the World Cup fever is over and the world has a new champion.  It was a month full of surprises, upsets, heartbreak and joy. As the first World Cup played in the age of social networking, we were able to watch the games live from anywhere and gloat (or cry) with friends across the world.

As expats, we feel the need to support our own countries, countries that we have identified with in the past, or well, teams that we just plain like.

As a TCK, I find it hard to support just one team. Regardless of my own nationality, and I’ve always grown up with England, Brazil, France, the U.S. and any African team as my usual choices. My loyalties were tested for a whole month here in NYC, but I was prepared. I made a list of local watering holes that showed the matches and set up what became my home World Cup control-room. I had my vuvuzela, jerseys and t-shirts, and my Facebook statuses were set to World Cup-related issues only.

My biggest conflict came during Ghana vs. USA. I found myself as the only openly proud Ghana supporter in a bar with more than two hundred drunk USA fans. After four hours of drinking, my vuvuzela cheering would not be silenced.  When the final whistle blew, my own roommate proceeded to pour his beer on me.

Germany vs. England provided an age-old grudge match that was truly hard on my eyes, although my German friend grinned for the whole weekend. Ghana’s defeat to Uruguay was possibly the worst day of the summer, period.  And according to a large number of Facebook status updates, it was the worst winter for my friends and family in Botswana and South Africa.

By the time the final game came around, we were left with Netherlands vs. Spain. I picked Netherlands. I have no personal ties with Netherlands, so when people asked me: “Why Netherlands?” I would say: “I have more Dutch friends than Spanish friends, and Van Persie plays for Arsenal.”  I realized then, that unlike Paul the Octopus, I chose teams based on the backgrounds of my own friends.

How did you pick your World Cup loyalties?