When I came to the U.S. for college, I suffered from a major case of “reverse culture shock.” Although I’m an American citizen, I hadn’t lived in the U.S. since I was 5 years old. I felt like I should feel at home here – after all, this is the country immigration officers see when they look at my passport. But whenever I listened to my American friends talk about their common childhood experiences, I couldn’t help but feel strangely alienated.

Getting used to American culture felt a little different because I thought that I shouldn’t have to adjust to my “home country.” But, once I realized that it was going to take some active cultural adjustment, life got a lot easier. As TCKs, we’ve been blessed with a lifetime of unique cultural experiences. If we use that same awareness that we’ve developed and keep an open mind, it can go a long way towards making the transition easier – and maybe even fun. So, here are five things, in my opinion, that can help you adjust to American culture.

1. Try the local food. No matter where you are, food is an essential component of a nation’s cultural identity. I’ve often heard people jokingly question what “American” food is. If you’re wondering, it’s not all cheeseburgers and fries – far from it. Because of America’s size and diversity, American cuisine differs greatly by region. Go out of your way to try out foods that are distinctive to the area in which you’re living. If you’re in New England, try some lobster and regional seafood. If you’re in the South, look for soul food. Love for food is universal, so take some time to explore the different flavors. You might be surprised.

2. Familiarize yourself with American media. What music do your American friends listen to? Which TV shows do they watch? What books do they read? If you have the time and energy, check them out, and get your friends to take you to concerts, movies and cultural events. People often use expressions and make references from popular culture – e.g. “pre-game,” “awkward turtle” – and being familiar with those references can be a fun way to better relate to those around you.

3. Force yourself to make small talk. It varies from place to place, but I’ve found that Americans are generally pretty friendly – at least, more so than the average Hong Kong stranger. It was a little off-putting at first, catching me completely off-guard. Early on in my freshman year, I went up to a Jamba Juice counter to order a smoothie. As I was paying, the cashier casually asked, “So, how’s your day going?” I did a double take. “Um… it’s good?” I wondered: Why is she asking me this? As I spent more time in Portland, I realized that making small talk with strangers was a perfectly normal thing to do. Forcing myself out of my comfort zone and striking up random conversations has been a good way for me to both adjust to American cultural practices and learn more about American people.

4. Share your life experiences, but keep an open mind. If you’re the only TCK in a group of born and bred Americans, chances are, you’ll be the most well-traveled among them. Sharing your life experiences is one thing, and life as a TCK is pretty awesome. But talking about it all the time and how it’s “so much better than living in the U.S.” only produces negative results. People will get annoyed with you pretty quickly.

Furthermore, if you constantly emphasize the differences between your background and others’ backgrounds, you unnecessarily make your adjustment more difficult because you are highlighting the things that separate you from your environment. A major part of adjustment is trying to see the whole picture – not just the parts that stand out the most.

Also, if someone says something that feels a little culturally insensitive or downright ignorant – I’ve been asked if Hong Kong was in Japan – don’t get too worked up about it. A lot of times people are just curious, but don’t realize they are being rude. If you get angry and give up on America too quickly, you’re closing yourself off from many potential learning opportunities. 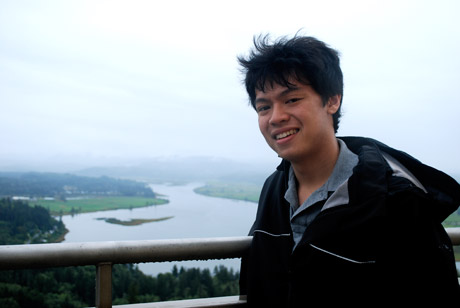 Alan as a sophomore at Reed College, taking a break from studying and exploring the natural beauty of the Pacific Northwest with friends.

5. Explore and try new things. Whether you’re surrounded by New York skyscrapers or Midwestern cornfields, try to explore the area around you. Find out what locals in your area do, and then go do them yourself. Maybe the idea of an American football game seems strange to you. Go to one and figure it out for yourself. Knowing that a cultural tradition isn’t your thing because you’ve tried it is better than not trying it at all because you thought it seemed weird.

And if you have a car or a friend with a car, drive out and see things. The U.S. is a huge country with many different aspects to it. Give it a chance and see for yourself.

Alan Montecillo is a junior at Reed College in Portland, Oregon.

About Alan Montecillo
Alan is a New York-born and Hong Kong-raised Filipino who has been flying all his life but still doesn’t know how to drive a car. After graduating from Hong Kong International School in 2009, he moved to Portland, Oregon, where he is currently majoring in Chinese literature at Reed College. Although he is interested in journalism and education, he will probably live in a box someday – but thanks to his Asian upbringing, you’ll have to take your shoes off before you enter. We are a community effort and are rewarded when you 'like,' comment or share our essays. If you enjoyed this piece, please take a moment to 'like' or share.