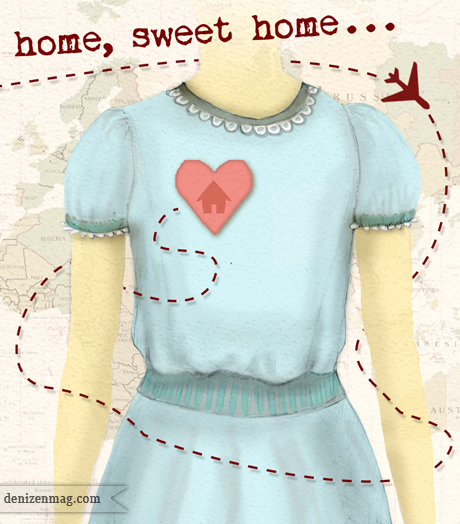 Illustration for Denizen by Lindsey Ruane

My husband walked into a staff meeting I was co-chairing, using a pet name that no-one apart from my parents had used. I couldn’t believe this had happened.

Dad was young; only 65 and very healthy. The doctors had said as much when he was in the UK just two months ago. But he’d had a sudden stroke, the type that can’t be reversed, and had died within a few hours in a hospital near Shanghai whose name I never learnt, in part of the world I couldn’t locate on Google maps.

I was stunned. I dropped my pens, stood up and burst out into uncontrollable sobbing. Dad was my role model, my best friend, my only true confidante. He was the reason I became a teacher. My brother dropped everything and took the next available flight to Shanghai to be with my Mum while I struggled on through, seeing Dad’s inspiration in every student I saw, grateful for supportive colleagues.

My parents moved to Singapore in 1975, where I was born and raised. I was sent to boarding school in England at 13 when they left for Laos, as they believed it was important for me to know firsthand who I was nationally, to understand the people from my “home country.” It was also for my own safety, as Dad was one of the most watched foreigners in Laos. He was heading up the Anglican Relief and Development Agency at a time when local Christians were regularly shot.

As a daughter of a “military-brat,” home had always been where my parents were, so when people asked me where I came from, the short version included my place of birth, Singapore, passport country, UK, and my parents’ current location, China. Like many, I had both many homes and none simultaneously. But now, with my Dad’s sudden death, I’d lost the place I felt most at home.

We all know what it’s like to lose our home, to be suddenly uprooted from our friends, pets, favourite spots and familiar weather. We’ve all been through it: parents transported to another posting, or send us “back” to our passport countries. I was used to that, having lived in 27 houses and attended 15 schools. I’d developed my coping strategies, like everyone else — make friends quickly and keep roots shallow. Know that you’ll never feel at home anywhere.

What I hadn’t factored in was that Dad had a weak heart like his Dad, and would be gone long before I’d spent enough time with him. Now, instead of not feeling at home in England, in my husband’s house or the places I’d lived as a child, I didn’t feel at home in the world. My parents’ house, my one, true home, no longer existed anywhere. I felt extremely claustrophobic. The world wasn’t big enough for me anymore as it no longer included my Dad. I felt a sting each time I saw a plane passing overhead from my house near Heathrow Airport as I realised that Dad would never come home on one.

My best friend, Sal, whose Dad had died from his third heart attack exactly a year before, took me out for dinner and thought she could help by telling me about her feelings of loss, but we quickly discovered our experiences were worlds apart, quite literally. She’d always lived in the same town, gone home every weekend and came from a very tight community, so experienced a full-on and relatively short-lived bereavement, at least in its intensity. I, however, could block out feelings of loss and pain as I’d become accustomed to not having Dad around, not seeing him as often as I’d like, having my letters lost in the mail en-route to yet another developing country. But the odd experience would open a Pandora’s box of emotion for me, like this Christmas.

I’d always flown home to spend Christmas with Mum and Dad wherever they were, going to the local church service and buying tonnes of presents for him as his birthday was January 3rd. This year, I went to my in-laws instead and shed a few tears as Christmas Day dawned bright and early in an unfamiliar portico, and again when I was sitting down to a traditional English roast instead of going to the best restaurant in town.

This year has changed me in many ways. I am no longer so scared of life as I realise when I die, I will be with my Dad, so I have scaled a few mountains. I have realized that home is not some far-off country but where I am, and I want to enjoy my surroundings. I call my Mum every day and see her every month, as she is now 73 miles away, not 5,800.

I am also much more eager to reach out to others and serve them in whatever way instead of seeing what I can get for myself. For Dad’s birthday, I had lots of presents that I’d already bought that no longer had a destination, so they were sold on to raise money for charity. I found other ways to remember him, like setting off a number of Chinese lanterns in that day’s gale-force conditions in our back garden. This year, I opened up my home to strangers in my local community to help me celebrate my birthday. It’s what Dad would want, and as he’s no longer around to help me and those around “enjoy life in all its fullness” — his life motto. It’s up to me to do that in whatever way I can.

About Elizabeth Hawkness-Smith
Elizabeth Hawkness-Smith is a freelance journalist and English Language teacher, who is originally from Singapore, but moved to England for school when she was a teenager. Since then, she has lived and worked in Laos, Ukraine and Wales, and is currently the administrator for three local charities in Reading, Berkshire. We are a community effort and are rewarded when you 'like,' comment or share our essays. If you enjoyed this piece, please take a moment to 'like' or share.